How to Approach an Accent 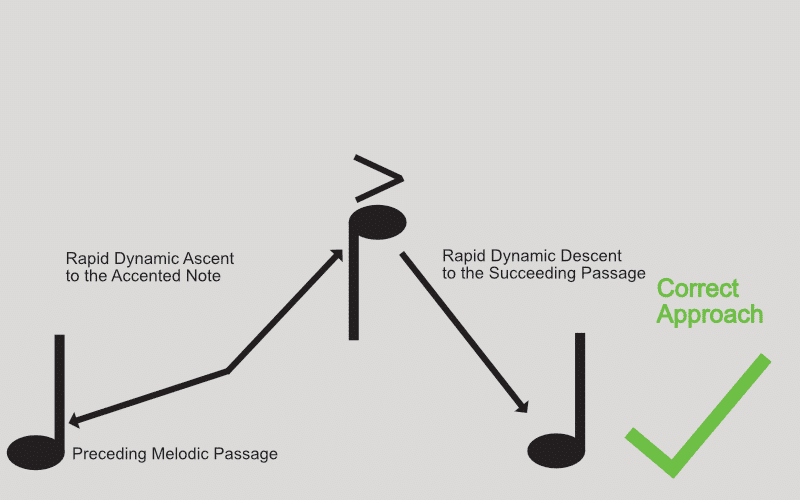 To explain this in a more simplified setting, it’s like when you aim to do, say, a successful pianissimo; to do that, you have to have already set clear dynamic boundaries of your own forte, your own piano and of all other dynamics in the preceding passages of the piece you are trying to play. If those previous dynamics are not presented clearly to your audience (or you haven’t taken them in clearly yourself), then the success of your pianissimo could be compromised.

The climax of the story you’re telling your audience depends not only on the quality of the story itself but also on your own musical prosody.

The accent symbol is like a short, open hairpin. It’s placed underneath or above a note and its purpose is to pronounce a rhythmical or melodic element (chord or note) of a passage.

As implied at the beginning of this article, the interpretational success of an articulation, in our case an accent, depends strongly on the interpretation of the preceding and succeeding music; if the music encircling the accent is not well presented, the accent won’t achieve its desired effect. Thus, the accent is, in essence, an integral result of its neighbouring musical gestalt.

So, as a general rule when attempting to perform an accent on a note or chord:

Avoid crescendoing smoothly to reach the accented note, since, frankly, the accented note won’t be considered accented if it derives from a symmetrical dynamic development of a previous passage. See example 1, below:

Contrary to “Example 1”, if the dynamic ascent to the accent arrives more abruptly, per se, the effect of the accent will be more discernible. See, example 2, below: 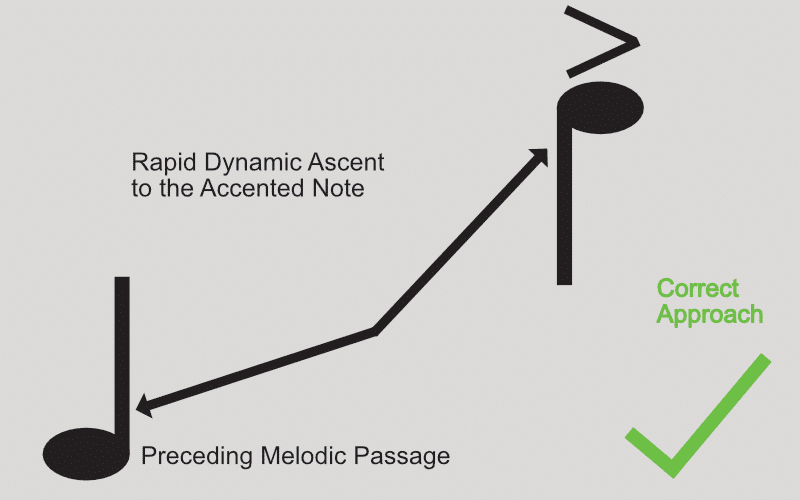 If the passage continues without accent on the voice that had the accent previously, then it is advisable to lower the dynamics of the succeeding passage, thus amplifying the “aftertaste” of the accent. See, example 3, below.

The approach of interpreting common articulations on the piano is not set in stone, and depends on many factors, such as the composer, the context (how convenient!) the tempo, and other provincial opinions that scholars have in abundance. Hope this text gets you off to a good start on the accents.

Support this free website by buying our originally engraved music
← Real Dynamics in Music Which Is the Perfect Repertoire to Teach Your Pupils →
Support Piano Practising on Patreon and Get Great Perks.