Leggiero and Its Differences to Legato

Is it possible to describe with words a musical articulation? Well, I could easily say no, because I’m sure that I would be insufficient to achieve this in this very article you are reading. However, a seasoned writer and musical scholar of pianism might let out a sizeable guffaw reading my thoughts above and profess that you could certainly describe articulations by both demonstrating them on an instrument (that goes without saying), and by writing about them; and, I would have to admit, he would be absolutely correct.

In this article I’m trying to define leggiero and answer a follow up question my pupils ask after I ask them to oblige to the articulation in our lessons — because, let’s face it, quite often “leggiero” is not written on the score and we have to add it when the music asks for it. The question my students ask after they see leggiero is, you guessed it, “Is it like more legato?” And, sometimes they could be right.

But leggiero is by no means legato.

Legato is when we tie notes together to create the effect of smoothness, but also to carve the boundaries of a phrase.

If I was forced to sum-up the definition of leggiero in a single sentence, I would say that leggiero is when you pitter-patter lightly on the piano keys. Leggiero is reserved for passages that belong to the quick denomination and contain sounds of light velocities (example 1). Leggiero is not legato, in a sense that all notes are tied between them producing a sense of sound unification, but, more often than not, it feels like a lightly pat staccato.

Note that often, leggiero is neither explicitly notated nor typeset as in this revised Schirmer edition by Arthur Friedman below. However, it could be desired on the R.H quavers of the finale:

In the following example, Rachmaninov suggests that the oval-shaped groups of semiquavers in the R.H must be played with an airy and gleaming feel. (Moscow Muzgiz – Example 2) The dynamic is pp, fitting for this type of articulation: 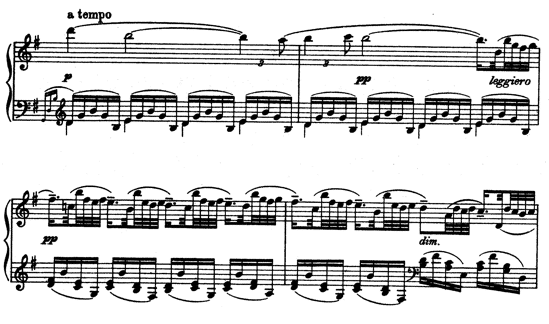 In the following example from his Op. 849, Czerny tries to persuade us that a more playful touch can be achieved by not succumbing to the “heaviness” of a legato iteration, but by “scratching” lightly on the nimble semiquavers of the R.H. The sound to be achieved should be crisp and exciting, something that a mere legato wouldn’t be able to suffice (example 3). Again, sensibly, the dynamic range of the leggiero remains in the sphere of soft (p), miles away from the “showoffness” of today’s voguish composers who claim they “push the limits” of notation by using leggiero on fortissimo passages (!) — example withheld.

Mendelssohn, on the other hand, submits that his leggiero could be legibly insinuated with the use of staccatoed quavers, provided, of course, that the tempo marking includes the very word (example 4). Arguably, his desire for an unassuming accompaniment to the melodic line cannot be notated in a healthier way. Laconic use of pedal is paramount throughout the accompaniamental parts of the piece (perhaps none or ¾ pedal) and only ½ pedal and above when the melodic takes over.

As you may see, different composers, different notational approaches to indicate leggiero. Nothing is set in stone here, but, just to be on the safe side, using the word “leggiero” or (unfortunately) “leggero” in our own performance editions, is highly advised. Some neo-purists even claim that leggierissimo is certainly needed to cater to the insufficiency of leggiero to denote an ever so light touch, and not only that, but apparently one could hear the difference between the two. Go figure — do not worry about them, though.

What is leggiero and its differences to legato

Again, leggiero is not a relative of legato. Well, maybe it is a distant relative who’s only left with a couple of black and white photos of some people he barely recognises… But, with that said here’s a few differences between leggiero and legato:

Support this free website by buying our originally engraved music
← Coming Back to Piano After a Long Break Real Dynamics in Music →
Support Piano Practising on Patreon and Get Great Perks.