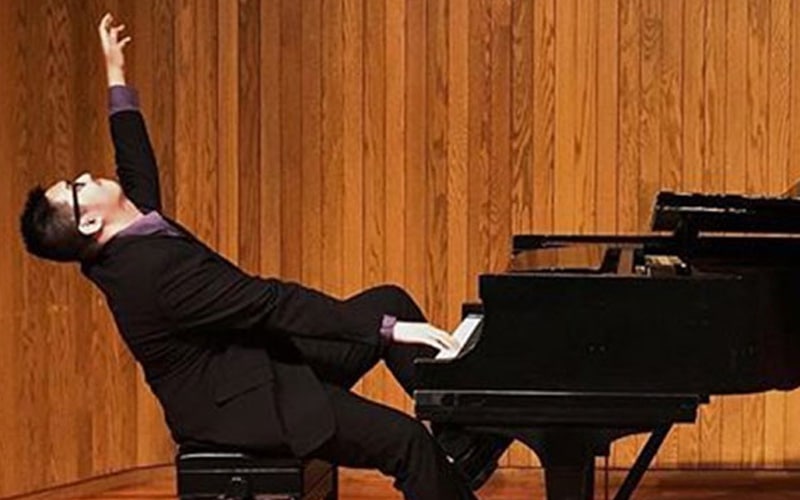 The show-offy pianist thinks he is not everyday riffraff. He knows deep inside that he must act snobbishly at all times except of course in the presence of more important pianists than him. Before them, he will strive to be modest and sincere. His acting superiorly to the rest of the pianistic “infants” has taken on so much that he is even show-offing when tanning on a holiday island beach.

While in concert a show-offy pianist naturally sustains a horrifying face which he labels artistic. When he bows at the end of a piece he looks as if he just lifted 40 kilos of tomatoes from the local street market.

When entering stage he expresses an innate disgust at the “lower” people surrounding him. When performing, he pretends to be so serious as if he was about to solve famine in a third world country together with bringing peace in the world.

His artificially empathetic expression only when confronted by worst pianists than him, takes a form of altruism and consideration. Common expressions when discussing with them would usually end with, “you may be right, I can’t decide” or when asked if he ever played a piece that he hasn’t, he would reply “not as such”.

Of course his inner “magnitude” and pompous last for acceptance increases the more he massacres a piece, and his self esteem reaches its zenith swiftly when people enthusiastically applaud a scandalous performance.

Repertoire of a show-offy pianist includes, but not excludes, Rachmaninov’s 3rd piano concerto, (typically only the cadenza from the1st movement), Chopin’s study no 4 op 10, Liszt’s LiebestrÃ¤ume, Beethoven’s FÃ¼r Elise and generally composers that have a ghastly face while posing for a publicity photo or portrait. He would rarely play slow pieces, except for necessary and unavoidable second movements to sonatas with frantic last movements.

He hardly ever plays Haydn, Frescobaldi, Scarlatti or other non show-offy, “light”, composers.  However, when asked, he will bend over backwards to praise them as true masters of classical music, although pretentiously. He would almost definitely have a Richard Clayderman piece in his party repertoire.

← Changing Piano Teacher Can I Become a Famous Pianist? →